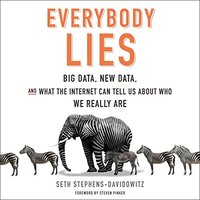 Finished “Everybody Lies: Big Data, New Data, and What the Internet Can Tell Us About Who We Really Are” by Seth Stephens-Davidowitz.
Read more →

📚 The Sentient Machine: The Coming Age of Artificial Intelligence by Amir Husain (2017) ★★★☆☆

Goodreads The future is now. Acclaimed technologist and inventor Amir Husain explains how we can live amidst the coming age of sentient machines and artificial intelligence—and not only survive, but thrive. Artificial “machine” intelligence is playing an ever-greater role in our society. We are already using cruise control in our cars, automatic checkout at the drugstore, and are unable to live without our smartphones.

Goodreads Recent years have seen the introduction of concepts from the new and exciting field of complexity science that have captivated the attention of economists, sociologists, engineers, businesspeople, and many others. These include tipping points, the sociological term used to describe moments when unique or rare phenomena become more commonplace; the wisdom of crowds, the argument that certain types of groups harness information and make decisions in more effective ways than individuals; six degrees of separation, the idea that it takes no more than six steps to find some form of connection between two random individuals; and emergence, the idea that new properties, processes, and structures can emerge unexpectedly from complex systems.

📚 Einstein’s Relativity and the Quantum Revolution by Richard Wolfson (2000) ★★★★☆

Goodreads “It doesn’t take an Einstein to understand modern physics,” says Professor Wolfson at the outset of these twenty-four lectures on what may be the most important subjects in the universe: relativity and quantum physics. Both have reputations for complexity. But the basic ideas behind them are, in fact, simple and comprehensible by anyone.

Goodreads Most children go through a dinosaur phase. Learning all the tongue-twisting names, picking favourites based on ferocity, armour, or sheer size. For many kids this love of ‘terrible lizards’ fizzles out at some point between starting and leaving primary school. All those fancy names slowly forgotten, no longer any need for a favourite.

Goodreads Have you ever wondered what it would be like to find yourself strapped to a giant rocket that’s about to go from zero to 17,500 miles per hour? Or to look back on Earth from outer space and see the surprisingly precise line between day and night?

Finished reading “Life 3.0: Being Human in the Age of Artificial Intelligence” by Max Tegmark, first published in 2017.

Goodreads How will Artificial Intelligence affect crime, war, justice, jobs, society and our very sense of being human? The rise of AI has the potential to transform our future more than any other technology–and there’s nobody better qualified or situated to explore that future than Max Tegmark, an MIT professor who’s helped mainstream research on how to keep AI beneficial.

Finished reading “Origin Story: A Big History of Everything” by David Christian, first published in 2018.

Goodreads How did we get from the Big Bang to today’s staggering complexity, in which seven billion humans are connected into networks powerful enough to transform the planet? And why, in comparison, are our closest primate relatives reduced to near-extinction? Big History creator David Christian gives the answers in a mind-expanding cosmological detective story told on the grandest possible scale.

Finished reading “The Future of Humanity: Terraforming Mars, Interstellar Travel, Immortality, and Our Destiny Beyond” by Michio Kaku, first published 2018.

Goodreads Human civilization is on the verge of spreading beyond Earth. More than a possibility, it is becoming a necessity: whether our hand is forced by climate change and resource depletion or whether future catastrophes compel us to abandon Earth, one day we will make our homes among the stars.

Goodreads How did a single genesis event create billions of galaxies, black holes, stars and planets? How did atoms assemble—here on earth, and perhaps on other worlds—into living beings intricate enough to ponder their origins? What fundamental laws govern our universe? This book describes new discoveries and offers remarkable insights into these fundamental questions.

Finished reading “The Art of Invisibility: The World’s Most Famous Hacker Teaches You How to Be Safe in the Age of Big Brother and Big Data” by Kevin Mitnick, first published February 14th 2017.

Goodreads The world’s most famous hacker reveals the secrets on how citizens and consumers can stay connected and on the grid safely and securely by using cloaking and counter-measures in today’s age of Big Brother and big data.

Goodreads Superintelligence asks the questions: What happens when machines surpass humans in general intelligence? Will artificial agents save or destroy us? Nick Bostrom lays the foundation for understanding the future of humanity and intelligent life. The human brain has some capabilities that the brains of other animals lack. It is to these distinctive capabilities that our species owes its dominant position.

Finished reading “Everything All at Once: How to Unleash Your Inner Nerd, Tap into Radical Curiosity and Solve Any Problem” by Bill Nye, first published July 11th 2017.

Goodreads Bill Nye has been the public face of science for more than 20 years. In Everything All At Once, the New York Times bestselling author issues a call to arms meant to rouse everyone to become the change they want to see in the world.

Goodreads Cosmos is one of the bestselling science books of all time. In clear-eyed prose, Sagan reveals a jewel-like blue world inhabited by a life form that is just beginning to discover its own identity and to venture into the vast ocean of space. Featuring a new Introduction by Sagan’s collaborator, Ann Druyan, and a new Foreword by astrophysicist Neil deGrasse Tyson, Cosmos retraces the fourteen billion years of cosmic evolution that have transformed matter into consciousness, exploring such topics as the origin of life, the human brain, Egyptian hieroglyphics, spacecraft missions, the death of the Sun, the evolution of galaxies, and the forces and individuals who helped to shape modern science.

Finished reading “Astrophysics for People in a Hurry” by Neil Degrasse Tyson, first published May 2nd 2017.

Goodreads What is the nature of space and time? How do we fit within the universe? How does the universe fit within us? There’s no better guide through these mind-expanding questions than acclaimed astrophysicist and best-selling author Neil deGrasse Tyson. But today, few of us have time to contemplate the cosmos.

Goodreads Yuval Noah Harari, author of the critically-acclaimed New York Times bestseller and international phenomenon Sapiens, returns with an equally original, compelling, and provocative book, turning his focus toward humanity’s future, and our quest to upgrade humans into gods. Over the past century humankind has managed to do the impossible and rein in famine, plague, and war.

Goodreads How did our species succeed in the battle for dominance? Why did our foraging ancestors come together to create cities and kingdoms? How did we come to believe in gods, nations and human rights; to trust money, books and laws; and to be enslaved by bureaucracy, timetables and consumerism? And what will our world be like in the millennia to come?