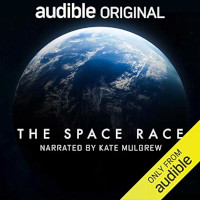 The 1960s space race captured our imaginations and our dreams. Today’s efforts to revitalize and expand space travel is being driven not just by government agencies such as NASA, but also by visionaries such as Richard Branson (Virgin Galactic), Elon Musk (SpaceX), and Jeff Bezos (Blue Origin).

To celebrate the 50th anniversary of the 1969 moon landing, this major documentary-drama series brings to life the past, present, and future of man’s > exploration of space. Between 1969 and 1972, twelve Americans walked on the moon. You’ll get to experience the thrill of that era and much, much more.

With unprecedented access, The Space Race takes listeners to Virgin Galactic’s space program in the Mojave Desert, features conversations with Buzz > Aldrin, Gene Cernan, Sergei Krikalev, Tim Peake, and numerous key players at mission control. This Audible Original and takes you behind the scenes to see how these exciting adventures in outer space came to be.