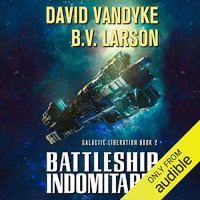 Commodore Straker’s rebellion grows in strength–but his enemies are growing even faster. Faced with a dozen rebel planets in their territory, the Mutuality finally takes notice of the upstart known as the Liberator, and they gather a vast fleet to crush him.

Preparing for a titanic interstellar battle, it’s clear Straker has no chance. His tiny enclave of free planets can’t survive the weight of a thousand worlds. His own officers realize this, and some of them begin to turn against him…

In a desperate attempt to halt their inevitable destruction, Straker and his team set out to capture the largest ship ever built. The monstrous vessel is well-defended and contains secrets no one suspects. Unleashing its power might turn the tide of the war–but it may also doom humanity.