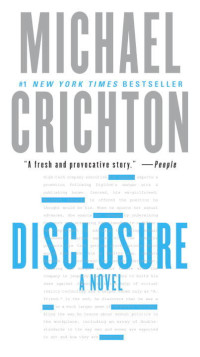 An up-and-coming executive at the computer firm DigiCom, Tom Sanders is a man whose corporate future is certain. But after a closed-door meeting with his new boss—a woman who is his former lover and has been promoted to the position he expected to have—Sanders finds himself caught in a nightmarish web of deceit in which he is branded the villain.

As Sanders scrambles to defend himself, he uncovers an electronic trail into the company’s secrets—and begins to grasp that a cynical and manipulative scheme has been devised to bring him down.