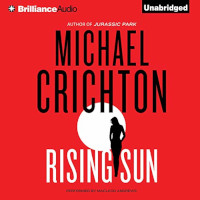 A riveting thriller of corporate intrigue and cutthroat competition between American and Japanese business interests.

On the forty-fifth floor of the Nakamoto tower in downtown Los Angeles - the new American headquarters of the immense Japanese conglomerate - a grand opening celebration is in full swing.

On the forty-sixth floor, in an empty conference room, the corpse of a beautiful young woman is discovered.

The investigation immediately becomes a headlong chase through a twisting maze of industrial intrigue, a no-holds-barred conflict in which control of a vital American technology is the fiercely coveted prize - and in which the Japanese saying “business is war” takes on a terrifying reality.