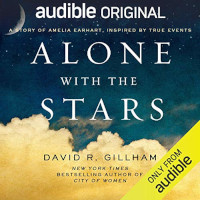 Finished “Alone with the Stars”.

In the summer of 1937, Amelia Earhart is the most famous woman in the world - a record-breaking pilot, a best-selling author, and a modern woman shattering the glass ceiling in the early days of aviation.

And then she vanishes.

In Tampa, Florida, 15-year-old Lizzie Friedlander spends her afternoons glued to her father’s radio, tapping into the enormity of a world she longs to travel. Lizzie can hardly believe her ears when she picks up a radio signal from a faraway source that sets her heart racing: “Amelia Earhart calling SOS!”

As Lizzie copies down the transmissions, it’s clear that the Amelia Earhart is not lost at sea, as the newspapers are dreading, but alive and calling for help. In a race against time, Lizzie must convince the local Coast Guard that the radio transmissions were real and that Earhart’s life hangs in the balance. But will anyone believe her?