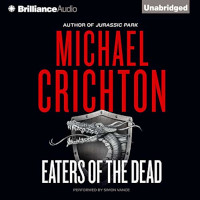 Finished “Eaters of the Dead”.

The year is A.D. 922. A refined Arab courtier, representative of the powerful Caliph of Bagdad, encounters a party of Viking warriors who are journeying to the barbaric North. He is appalled by their Viking customs – the wanton sexuality of their pale, angular women, their disregard for cleanliness , their cold-blooded human sacrifices. But it is not until they reach the depths of the Northland that the courtier learns the horrifying and inescapable truth: He has been enlisted by these savage, inscrutable warriors to help combat a terror that plagues them – a monstrosity that emerges under cover of night to slaughter the Vikings and devour their flesh . . .