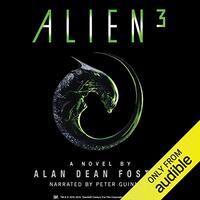 Here, even the wind screams. Abandoned hulks of machinery rust in the colorless landscape. Dark, oily seas beat against a jagged black shore. And the remnants of a reentry space vehicle crash into the rough waves. In it sleeps Ripley, a woman who has battled the enemy twice. It killed her whole crew the first time. The second time, it slaughtered a spaceload of death-dealing Marines. Now on this prison planet that houses only a horde of defiant, captive men, she will have to fight the ultimate alien horror one more time.