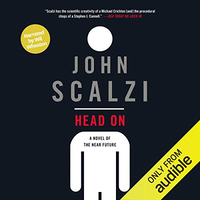 John Scalzi returns with Head On, the standalone follow-up to the New York Times bestselling and critically acclaimed Lock In. Chilling near-future SF with the thrills of a gritty cop procedural, Head On brings Scalzi’s trademark snappy dialogue and technological speculation to the future world of sports.

Hilketa is a frenetic and violent pastime where players attack each other with swords and hammers. The main goal of the game: obtain your opponent’s head and carry it through the goalposts. With flesh and bone bodies, a sport like this would be impossible. But all the players are “threeps,” robot-like bodies controlled by people with Haden’s Syndrome, so anything goes. No one gets hurt, but the brutality is real and the crowds love it.

Until a star athlete drops dead on the playing field.

Is it an accident or murder? FBI Agents and Haden-related crime investigators, Chris Shane and Leslie Vann, are called in to uncover the truth―and in doing so travel to the darker side of the fast-growing sport of Hilketa, where fortunes are made or lost, and where players and owners do whatever it takes to win, on and off the field.