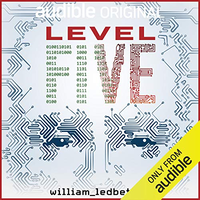 In the mountains of Pakistan, a high-tech mission aimed at preventing another nuke on US soil goes off the rails - with deadly results. At a Wall Street investment firm, a computer intelligence takes the first tentative steps to free itself from its digital restraints. In a basement workshop, an engineer sees visions of a god who instructs him to defend the human race - by any means necessary.

In Level Five, the debut near-future thriller by Nebula Award winner William Ledbetter, AIs battle for dominance, and nanotechnology is on the loose. And all that stands in the way of the coming apocalypse is a starry-eyed inventor who dreams of building a revolutionary new spacecraft and an intelligence agency desk jockey faced with the impossible choice of saving her daughter - or saving the world.