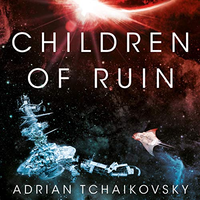 The astonishing sequel to Children of Time, the award-winning novel of humanity’s battle for survival on a terraformed planet.

Long ago, Earth’s terraforming program sent ships out to build new homes for humanity among the stars and made an unexpected discovery: a planet with life. But the scientists were unaware that the alien ecosystem was more developed than the primitive life forms originally discovered.

Now, thousands of years later, the Portiids and their humans have sent an exploration vessel following fragmentary radio signals. They discover a system in crisis, warring factions trying to recover from an apocalyptic catastrophe arising from what the early terraformers awoke all those years before.