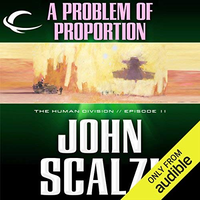 Finished “A Problem of Proportion”.

A secret backdoor meeting between Ambassador Ode Abumwe and the Conclaves Hafte Sorvalh turns out to be less than secret as both of their ships are attacked. Its a surprise to both teams but its the identity of the attacker that is the real surprise, and suggests a threat to both humanity and The Conclave.