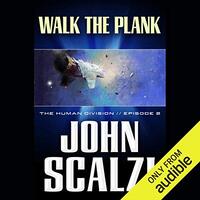 Wildcat colonies are illegal, unauthorized and secret so when an injured stranger shows up at the wildcat colony New Seattle, the colony leaders are understandably suspicious of who he is and what he represents. His story of how he came to their colony is shocking, surprising, and might have bigger consequences than anyone could have expected.

The second episode of The Human Division, John Scalzi’s new thirteen-episode novel in the world of his bestselling Old Man’s War.