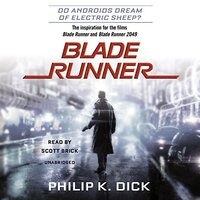 Finished “Blade Runner (aka Do Androids Dream of Electric Sheep?)”.

A final, apocalyptic, world war has killed millions, driving entire species into extinction and sending the majority of mankind off-planet. Those who remain, venerate all remaining examples of life, and owning an animal of your own is both a symbol of status and a necessity. For those who can’t afford an authentic animal, companies build incredibly realistic simulacrae: horses, birds, cats, sheep . . . even humans.