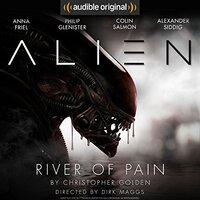 Ellen Ripley finally returns to Earth, only to discover that LV-426 - resting place of the Nostromo and the xenomorph she first encountered - has been renamed Acheron.

Protected by Colonial Marines, the colonists seek to terraform the storm-swept planet against all the odds. But in the face of brutal living conditions and the daily struggles of a new world, there is humanity and hope. Anne and Russell Jorden - two colonists who are seeking a fortune that eluded them on Earth - are expecting their first born child.

The birth of Rebecca Jorden, known to her family as ‘Newt’, is a cause for celebration. But as the colony grows and expands, so too do the political struggles between a small detachment of Colonial Marines and the Weyland-Yutani scientists posted on Acheron. Willing to overlook their orders in order to serve the Company’s interests, these scientists have another far more sinister agenda - to covertly capture a living Alien.

The wildcatters discover a vast, decaying spaceship. The horseshoe-shaped vessel is of particular interest to Weyland-Yutani, and may be the answer to their dreams. But what Anne and Russell find on board proves to be the stuff, not of dreams, but of nightmares.