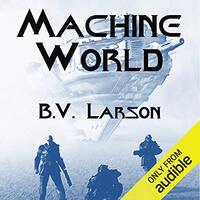 The Galactics arrived with their Battle Fleet in 2052. Rather than being exterminated under a barrage of hell-burners, Earth joined a vast Empire that spanned the Milky Way. Our only worthwhile trade goods are our infamous mercenary legions, elite troops we sell to the highest alien bidder.

In the fourth book of the series, James McGill is up for promotion. Not everyone is happy about that, and McGill must prove he’s worth his stripes. Deployed to a strange alien planet outside the boundaries of the Galactic Empire, he’s caught up in warfare and political intrigue. Earth expands, the Cephalopod Kingdom launches ships to stop us, and a grand conspiracy emerges among the upper ranks of the Hegemony military.

In MACHINE WORLD, McGill faces an entirely new kind of alien life, Galactic prosecution, and thousands of relentless squid troopers. He lives and dies in the falling ashes of the Empire, a man of unique honor at the dawn of humanity’s resurgence.