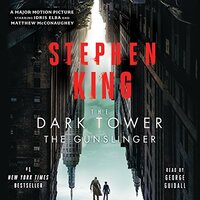 Beginning with a short story appearing in The Magazine of Fantasy and Science Fiction in 1978, the publication of Stephen King’s epic work of fantasy – what he considers to be a single long novel and his magnum opus – has spanned a quarter of a century.

Set in a world of extraordinary circumstances, filled with stunning visual imagery and unforgettable characters, The Dark Tower series is King’s most visionary feat of storytelling, a magical mix of science fiction, fantasy, and horror that may well be his crowning achievement.

Book I In The Gunslinger (originally published in 1982), King introduces his most enigmatic hero, Roland Deschain of Gilead, the Last Gunslinger. He is a haunting, solitary figure at first, on a mysterious quest through a desolate world that eerily mirrors our own. Pursuing the man in black, an evil being who can bring the dead back to life, Roland is a good man who seems to leave nothing but death in his wake.