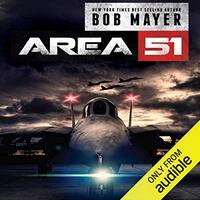 Deep in the Nevada desert is the most secure compound in the United States: Area 51.

The most chilling experiment of all time is about to begin there. The President doesn’t know about it. Just a few scientists and military personnel working for Majestic-12 do, and they are about to make a very big mistake….

Former Green Beret Mike Turcotte, assigned to Nightscape, security for Area 51, begins to realize things aren’t as they seem. Deep inside the Great Pyramid in Giza, an archaeologist makes a startling discovery in the lowest chamber. On Easter Island, what are the giant statues guarding? What was Thule and why were the Nazis so intent on finding it during World War II? What are the strange stones off the coast of Bimini? All these clues and more add up to a frightening countdown that could bring about the end of our planet. Turcotte and Presidential Science Adviser Lisa Duncan must race against time to save the world from the secret hidden at Area 51.