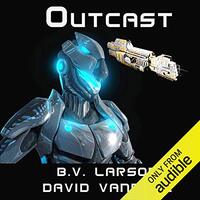 Many peaceful years have passed since the Macro Wars ended. Most of those who fought against the heartless machines have aged—but not the ingenious artificial construct known as Marvin. His insatiable curiosity is as strong as ever, and he’s brought home fresh perils to humanity’s doorstep in OUTCAST.

This new Saga in the Star Force universe begins with Cody Riggs, the sole surviving child of Kyle Riggs. He’s fresh out of the Star Force Academy and ready to explore the galaxy on his own. Young but fearless, he finds himself lost in uncharted space, seeking a way home. At every step he’s hunted by hostile aliens he doesn’t dare lead back to Earth.

The longest book in the series, OUTCAST is a full length novel of science fiction by bestselling authors B. V. Larson and David VanDyke.