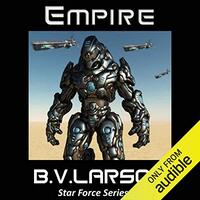 In EMPIRE, the sixth book of the Star Force Series, the story moves in a new direction. Earth falls quiet, and the few reports coming out of the homeworld are increasingly strange. Isolated in the Eden system, Riggs realizes his enemies are forming an alliance against him. Crushed between two monstrous fleets, the last defenders of Star Force must forge their own alliance with the biotic aliens. But which alien race can Riggs truly trust?