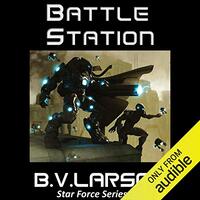 In BATTLE STATION Kyle Riggs faces new challenges, new alien fleets and learns the secrets behind the war he has been fighting for years.

In the fifth book of the Star Force Series, the Eden system is in humanity’s grasp, but can they keep it? Star Force is weak after a long war, and many yearn to go home. Knowing the machines will return with a new armada eventually, Riggs seeks a more permanent solution. Along the way, worlds are won and lost, millions perish, and great truths are revealed.