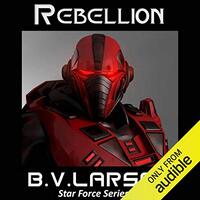 REBELLION is the turning point in the great interstellar war between all living creatures and the machines. Star Force is on the side of the machines–but for how long?

In the third book of the Star Force series, Kyle Riggs learns just what kind of war Earth is caught up in. At the mercy of the Macros, his marines fight against new alien races, big and small. They battle the innocent and the vile alike, until their situation becomes grim.

REBELLION is a military science fiction novel by bestselling author B. V. Larson.